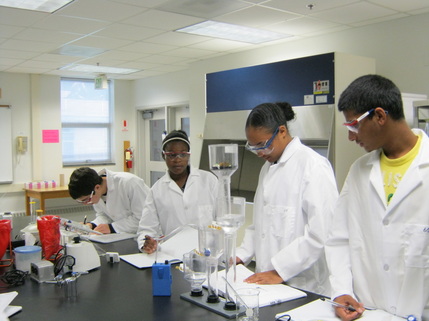 The Biotechnology II GT on-campus students complete a research project in partnership with Johns Hopkins University MBGR (Molecular Biology Genomics Research) and Rutgers University through a program called the Waksman Student Scholars Program. It is designed help high school students learn modern molecular genetics by having them engage in genuine scientific research projects.
2015/2016 Research Project
The research project for the 2015/2016 WSSP focuses on analysis of the mRNA population of Landoltia punctata a duckweed. We will ask: Which genes are expressed in this organism, and how do they compare with expressed genes from other species? The answer to this question may link to the larger goals of optimizing the expressed proteins as the plant's manufactures starches that could be processed into Biofuels, serves as a essential nutrient source in aquaculture and acts as an agent of phytoremediation.
Students in the project will isolate and sequence genes from a cDNA library (a collection of mRNA's copied into DNA's). These sequences have never been determined before. If a student successfully analyzes a sequence, it will be published in GenBank, the international repository of all known DNA sequences, for other scientists to study. Each published sequence will bear the student's name and his/her teacher's name. In the course of their analysis, students in the program will compare Landoltia sequences with those from other eukaryotes to determine the evolutionary relationship of Landoltia to other organisms. In addition, if a sequence codes for a protein in another organism whose three dimensional structure has been solved, students may be able to make a model of the protein and see how it differs from the same protein in Landoltia.
In the course of these studies, students, teachers, and research scientists work together, using the basic principles of molecular biology and genetic engineering to try to solve this research problem. By actually doing this type of science students gain an understanding of how the scientific discovery process operates. A video overview of the WSSP and the research project can be found HERE.